Note: This article is from ultralightnews.com is aged and is specific toward Pennzoil but it shows how profound the differences can be between different types/grades of 2-stroke oils can be. It may aid in selection of your oil.

There are several oils for an ultralight pilot to select from, and everybody has their favorite. Others are confused about claims as to which one they should use and why.

How about oil injected versus the common fuel and oil pre-mix? What the difference between an oil formulate for water-cooled engines and an oil made for air-cooled engines?

To understand how two-cycle oils work in your engine, we need to cover some basic training on engine operating conditions and oil formulation.

Outboard engines are characterized by their constant speed, high output operation. They are usually set at a desired high speed and continue at speed until the destination is reached and then throttled down. Also, they are constantly cooled with fresh, cool, non-recirculated water. Chain saws, on the oth 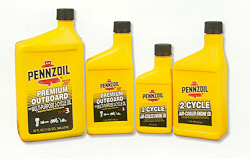 er hand, are a high action operation. They are constantly started and stopped, used for short periods and frequent overloads are its hard place in life.

Water-cooled two-cycle engine oils require higher levels of a heavy oil to prevent piston and cylinder wall scuffing. Because of their high average piston temperature, lighter oils evaporate too quickly from the piston cylinder contact area. The heavy base oil, which vaporizes at very high temperatures, resists evaporation and remains in place to provide lubrication to the piston and cylinder. Air-cooled oil formulations must have much lower levels of the heavy base oil than water-cooled engine oils.

These oils require only a small amount of heavy oil to provide protection against piston scuffing and seizure at peak temperatures. Heavy levels of heavy base oils in an oil formulated for air-cooled engines can cause engines deposits.

These deposits form as a result of incomplete burning of the heavy oil. The deposits can cause piston ring sticking and can eventually plug or disrupt the flow of the exhaust system, resulting in power loss and possible engine damage. Detergent additives should not be used in water-cooled two-cycle oil formulations. When burned with the fuel, detergents can produce an ash deposit in the cylinders. This ash deposit can possibly foul spark plugs, form exhaust port deposits which cause loss of power, and possibly create cylinder hot spots that can cause destructive pre-ignition.

On the other hand, the only way to protect air- cooled two-cycle engines against piston ring sticking at their high peak temperatures is to include some detergent additives in the oil formulation. Detergents provide high temperature deposit control not available from other additives used in the oil. However, in the air-cooled engine, any ash deposits that could form from the detergents are dislodged by engine vibration and exhausted from the engine.

Now is a good time for a lesson on ash. Ash is the non-combustible residue of a lubrication oil or fuel. Detergent additives contain metallic derivatives, such as calcium, barium and magnesium sulfonates that are common sources of ash. Ash deposits can impair engine efficiency and power.

But, detergents are an important component of engine oil that help control varnish deposits, piston ring deposits and rust (yes, rust) by keeping insoluble combustion particles from adhering to metal surfaces. In some cases, detergents neutralize acids formed from combustion of the fuel mixture. Ash deposits may have a grayish color, whereas carbon residue is usually black and sooty.

Carbon residue, on the other hand, is different from ash. Carbon residue is formed from unburned and partially burned fuel, and from burning of the crankcase lubricant. Water from condensation of combustion products along with carbon residue from fuel contribute to engine piston deposits. Carbon de posits are normally black and have a sooty appearance.

Air-cooled oils contain lower amounts of antioxidants and dispersants, since the detergent additives do most of the work of preventing deposit accumulation. These oils also contain rust inhibitor additives to protect against rust that can form from water that enters the engine due to condensation.

So, how do some oils claim to be multi-purpose or formulated for water and air-cooled engines? These oils have usually been formulated to meet the National Marine Manufacturers Association (N M MA) TC-WI I TM or TC-W3 TM specification. These specifications require the oils be tested under rigorous test conditions. An air-cooled engine test is part of these requirements.

Engines that require the fuel and oil to be pre mixed should use a two percent (50:1) concentration of oil in the fuel. It is very important that the fuel/oil mix is correct. In other words, don't add too much or too little oil to the fuel. If a little does good, more oil added to the fuel doesn't necessarily do better. In fact, too much oil will lead to excessive deposits and could also cause excessive exhaust smoke and spark plug fouling. Not enough oil can lead to piston skirt and cylinder wall scuffing and eventual engine damage.

Gasoline containing alcohol (ethanol and/or methanol) should not be used unless permitted by the engine manufacturer. Alcohol-containing fuels can absorb water and separate from the gasoline. Additionally, the alcohol may not be compatible with some fuel system components, such as plastic and rubber compounds.

Rotax also recommends "de-carboning" the engine after every 50 hours of operation. This procedure is designed to remove excessive piston deposits to check for possible stuck piston rings. Rotax allows up to 0.040 inches of soot and carbon buildup on the pis ton crown before removal of the carbon is required. Not only does Rotax recommend an API TC oil for the 447 and 503 air-cooled engines, but also for the 532 and 582 engines run at internal temperatures similar to the air-cooled Rotax engines, as evidenced by their use of the same spark plug.

Special precautions should be taken when switching oils, even between the same brands. Because of the special formulation of air-cooled engine oil, these oils generally are not compatible with water-cooled engine oils. Caution should be exercised to ensure that these products are not mixed together. Special precautions should be taken when changing from a product designed primarily for water-cooled engines to an air-cooled product, particularly in oil injection systems where the undiluted oils would be mixed together. It is recommended that the oil reservoir and lines be drained when changing to another formulation. In applications where the oil is premixed with the fuel, it is recommended the fuel tank(s) be drained and filters changed.

Two stroke Aircraft engine oils - there is a difference!

There is one OIL FOR AIR-COOLED ENGINES.
Air cooled engines run hotter than water cooled outboard-type engines and require a lubricant formulated for their unique lubrication requirements.

Outboard oils have a lower flashing point and tend to burn up early in air-cooled engines, causing carbonization and eventual ring sticking.

Because of this, BIA, TC-W and TC-WII oils can promote the formation of deposits.

These liquid cooled engines run the same high internal temperatures as the air-cooled smaller engines and require the same high-temperature type of oil.

ATTENTION
These oils are NOT compatible with TC-W or TC-WII lubricants.

DO NOT MIX THE TWO DIFFERENT OILS IN YOUR SYSTEM OR  GELLING MIGHT  OCCUR.

Follow manufacturer's recommendation for mixing ratios. For the 618 Rotax aircraft engine two stroke Water cooled engine oil is recommended sue to the cooler internal temperatures. With a lower flash point, this oil is perfect for engines such as the 618 which run similar temperatures to those of an outboard type engine.

ATTENTION - There are also two different  formulations one for pre mix and one for oil injection!

CAUTION: DO NOT MIX WITH 2-CYCLE AIR COOLED OIL
WITH TWO STROKE WATER COOLED OILS OR IT MAY GEL IN YOUR LINES.
Drain all oil out if you ever change oil types.

The type of two stroke oil you use in your ultralight aircraft engine DOES make a difference!

When Pennzoil-Quaker State Company decided to upgrade its popular Pennzoil, Outboard and Multi-Purpose Two-Cycle Oil formulation, they felt it was necessary to look at all niche markets the product was used in to be sure the changes would be beneficial for the end user.

So, they teamed up with Rotax engine experts, Lockwood Aviation in Sebring, Florida, to design a test that would assure the new product would continue to protect these engines.

Four different oils were chosen for the test. The oils tested were:
1) Pennzoil" Two-Cycle Air-Cooled Engine Oil;
2) Pennzoil' Premium Out- board and Multi-purpose Two Cycle Oil;
3) A conventional petroleum two-cycle oil; and
4) A two-cycle synthetic oil.

Each oil was color coded for identification and assigned to a particular engine (see Table I at bottom of page.) To ensure a "blind test," the technicians operating the test stand were unaware of which product was used in each engine.

In this test, the Pennzoil oils were compared to typical petroleum-based and synthetic low-ash two-stroke oils.

It is worthy to note that many pilots using synthetic oil may mix at a higher (leaner) fuel/oil ratio than the engine manufacturer may specify. Synthetic oils tend to work well against deposit formation at these higher ratios, however engine manufacturers generally state that the higher (leaner) oil ratio may not provide enough residual protection from corrosion during extended storage conditions. Therefore, all oils run in this test were run at the manufacturer's recommended fuel/oil ratio of 50:1.

Four new Rotax 503 two-cylinder fan- cooled engines were purchased and utilized since it is one of the most popular engines in this market. Each engine used a premix oiling system instead of the oil injection option. The engines were fueled with premium unleaded gasoline that was mixed with the test oils at the engine manufacturer's recommended ratio of 50:1. The engines were set up identically to achieve 6300 rpm at full throttle. After a one hour prescribed break-in cycle, the engines were run under strenuous one-hour cycles simulating a typical flight routine - i.e., full power takeoff, cruise, descent, and idle conditions (See Table 2 at bottom of this page).

The rating standards are based on a scale from I to 10. The higher the rating, the better the evaluation or performance of the lubricant in the specific area rated.

The piston rings were rated as to the state of sticking and the degree of circumference around the piston that they were stuck. Deposits were evaluated by volume and appearance, ranging from 10 (clean- absence of deposits) to 0.0 (maximum deposits - those deposits which take up ALL of the available space between moving parts and display rubbed or polished characteristics).

Resistance against cylinder head, piston and ring land deposits is very important in engines. Piston rings help remove heat from the piston and transfer it to the cooler cylinder walls, as well as provide sealing between the combustion chamber and crankcase. If deposits become too heavy and piston rings become stuck in their grooves, then premature wear and damage will occur due to the ring's inability

to properly seal the combustion chamber and transfer heat. Excessive cylinder head de- posits increase the octane requirement of the engine and may also cause pre-ignition and detonation, leading to engine damage.

Graph 2 evaluates piston skirt deposits on both the thrust and anti-thrust sides of the piston. The thrust side of the piston is the side that tends to bear most heavily

If we had any doubts, these tests confirmed that oil obviously does make a difference in the performance of a sport aviation engine! Pennzoil was proud to confirm that its line of two-cycle oils continue to provide the highest degree of performance in this demanding application.